The sound of shimmering cymbals radiates out from the stage where the band are playing.  The leader has the microphone: “Holy Spirit come into this room now we pray.  Fill us; transform us; re-new us.  Come with your fire and fall upon these people now.”  Right on cue, the echoing sound of wild laughter starts in one corner of the tent.  A teenage boy in torn jeans is standing up with his hands up in the air, shouting with total abandon, “YES JESUS!  YES!”  And then his words dissolve once more into raucous fits of laughter.  A ripple of chuckling goes through the crowd.  “Yes!  Don’t hold back!” shouts the leader, “The Lord is releasing deep joy in this tent tonight!”

When I was eighteen, I knew everything.

I was Right – not so much about anything in particular as in my general state of being – and, as a future Oxford student, I made sure people knew about it.  Like many typical teenagers, I passionately defended my beliefs, which were, to say the least, black and white.  Unlike most, I was deeply religious.  I argued that every passage in the Bible was factually true; that everyone apart from Christians would be punished in Hell for all eternity; that God made the world in seven days; that Jesus died on the cross ‘in my place’, cancelling out my sins by ‘paying the debt’ that was ‘rightfully mine’ – and so on with all of the key lingo of evangelical Christianity.

While others learnt to lose themselves in the sound of 00’s dance tunes, I was singing along to Tim Hughes and other Christian pop artists (yes it’s a thing!) at the youth weekend away.

While others had their first sexual encounters, fumbling into bedrooms at house parties and behind the dorms at cadet camp, I had my first spiritual ‘encounters’, ‘laying hands on’ other teenagers asking for their sore throats / broken arms to be healed.

While others downed Bacardi Breezers, I chose J2Os – and felt like a rebel for drinking out of the bottle.

I was deeply ensconced in the evangelical sub-culture, and totally committed.

And yet from this same period of my life, I have memories of secret, night-time doubt crushing me with fear as I curled up under my polka-dot duvet, questioning, “What if none of it’s true?  What if I’m wasting my life?  What if there is no God?  What if I’m going to Hell?”

The youth leaders warned me that three years of studying theology at Oxford would “ruin my faith”, and that professors were only out to “tear the Bible apart”, but for once, I went against their advice.  Deep inside, I knew that this was a good way forwards for me.

In reality, it took about 2 weeks – not to destroy my faith, but to totally dismantle my certainty.  It had never before occurred to me that I had only been taught about the Bible from a particular, narrow perspective, and I had assumed that Christian beliefs were simply ‘inspired by God’, dropped down from on high.  I had no idea about the ways in which they had developed over time through politics and history and geography.  It was terrifying, but in hindsight the best thing that could possibly have happened to me: it was the start of my learning to trust that inner voice, guiding my footsteps into places that my church said I shouldn’t go.

For the first time I had to address all of those questions head on and to face the part of me that I’d kept hidden for so long.  The Doubter.  The Uncertain.  The Faithless.  Now, in the light of academic study, my black and white belief structures simply evaporated.

Although in such a transition, the feeling of shame can be overwhelming, the acceptance of doubt is also the first hurdle in moving beyond certainty towards ‘faith’.  This song that I discovered around that time helped me to move on from my previous belief structure by depicting faith not as the certainty of doctrines but as a search in the darkness that is driven by thirst.  It helped me to realise that a lack of certainty is not dangerous, as I had thought, but is something that can lead us towards meaning.  Even towards God.

“By night we hasten in darkness

to search for living water.

Only our thirst leads us onwards.

Only our thirst leads us onwards.”

For one thing, I no longer need to argue with those who disagree with me.  I am not troubled by their questioning because their questioning is also my own.  It only makes me realise all the more that they are not so different from me.  And where they are different, that is a good thing – an amazing thing about this world.

Megan Phelps from Westboro’ Baptist Church aka ‘America’s Most Hated Family’ (see picture below) wrote what she learnt about doubt and certainty in the process of leaving: 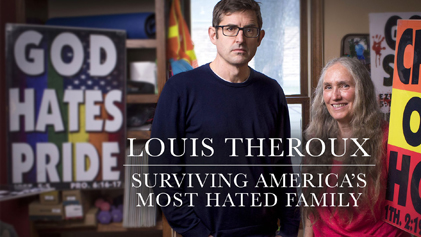 “Doubt [is] nothing more than epistemological humility: a deep and practical awareness that outside our sphere of knowledge there exist[s] information and experiences that might show our position to be in error.  Doubt causes us to hold a strong position a bit more loosely, such that an acknowledgement of ignorance or error doesn’t crush our sense of self or leave us totally unmoored if our position proves untenable.  Certainty is the opposite: it hampers inquiry and hinders growth.  It teaches us to ignore evidence that contradicts our ideas, and encourages us to defend our position at all costs, even as it reveals itself as indefensible.  Certainty sees compromise as weak, hypocritical, evil … Doubt wasn’t the sin, I came to believe.  It was the arrogance of certainty” (Phelps-Roper 2019: 273)

Many evangelical church leaders make the mistake of preaching only from a position of certainty, while refusing even to acknowledge the by-product of a rejected, night-time, hidden Doubter.  But beyond certainty there is Faith, in which doubt is not only accepted, it is integral.

2 replies on “Beyond Certainty… Towards Faith and Doubt”

Thank you so much for sharing so truthfully and helpfully for others. As I’ve said before you are always an inspiration darling Alice x

Thank you Joey! That’s kind of you xx